Support for marijuana legalization in the U.S. remains at the record-high 68% recorded in each of the past two years according to a new Gallup Poll. 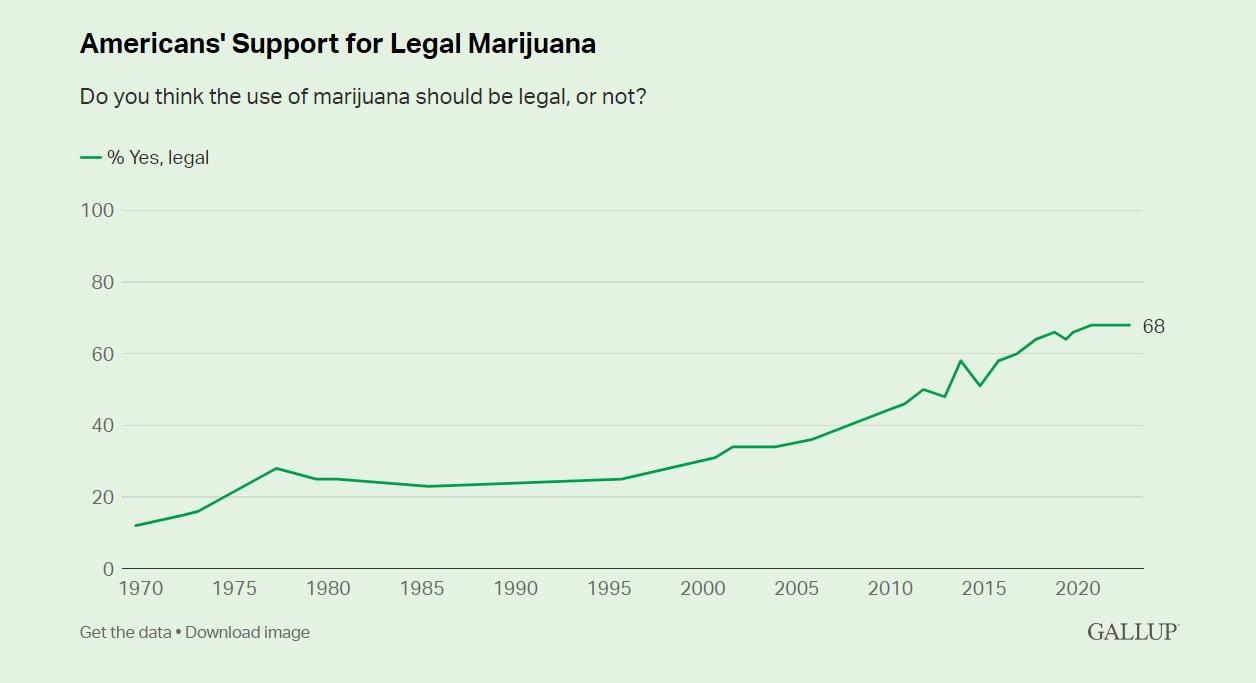 When Gallup first asked about legalizing marijuana in 1969, just 12% of Americans were in favor. Support grew steadily to 2000, when just about one third (31%) said they want marijuana legalized. Support surpassed the majority level in 2013, and since 2016 at least six in 10 have been in favor.

The new poll is based on thousands of participants who were questioned between October 3 and October 20.

Specifically, subgroups whose support for legalization exceeds the national average by 10 or more percentage points include those with no religious preference (89%), self-identified liberals (84%), Democrats (81%), young adults (79%) and those who seldom or never attend religious services (78%).

Groups whose support is at least 10 points below the national average include those who attend church weekly (46%), conservatives (49%), Republicans (51%), older adults (53%) and Hispanic adults (56%).

“A statistical analysis that takes into account the influence of multiple respondent characteristics simultaneously confirms that ideology, religiosity, age and party identification are the most important predictors of marijuana attitudes”, states Gallup. “The model indicates that ideology is slightly more influential than the other variables.”

After controlling for the effects of other respondent characteristics such as gender, age and education, political liberals are about three times more likely, on average, than political conservatives to support legalizing marijuana, says Gallup. Similarly, younger adults, Democrats, those who seldom or never attend church and those without a religious preference are slightly less than 2.5 times more likely to say marijuana should be legal than older adults, Republicans, weekly churchgoers and those with a religious preference, respectively.

“At every age level, conservatives are less likely than moderates or liberals to support making marijuana legal”, the poll found. “However, majorities of younger conservatives (those under age 50) favor legalization, compared with 32% of older conservatives.”

Age differences among political moderates are more modest, with 20 points separating the oldest (62%) and youngest (82%) moderates. That contrasts with a 33-point gap between the oldest and youngest conservatives. Liberals, on the other hand, show similarly high support — 81% or higher — regardless of age.

Below is what Gallup considers to be the “Bottom Line” of this new poll.

Americans have grown much more supportive of legalizing marijuana over the past two decades, but support appears to be leveling off for now, not showing any change in the past three years.

While majorities of most major subgroups are in favor of legalizing marijuana, there are a few holdouts — namely, political conservatives and regular churchgoers. Small segments of the population (in particular, older conservatives) are still disinclined to think marijuana use should be legal. However, younger conservatives and younger moderates are more inclined than their older counterparts to think cannabis should be legal. As such, in future decades support for legalizing marijuana can be expected to continue to grow as newer, likely more pro-marijuana, generations replace older generations in the U.S. population.